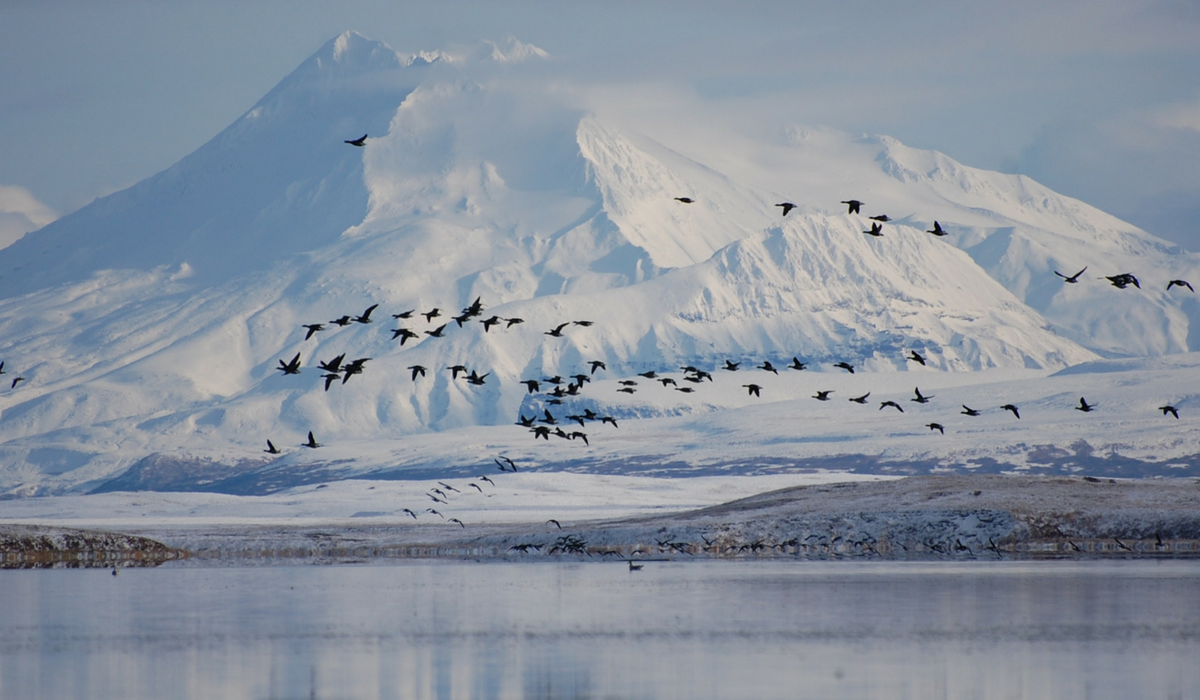 Izembek is one of the most important migratory bird staging and wintering habitats in the world.
Brant in Izembek National Wildlife Refuge. Photo: Kristine Sowl / USFWS
Important Bird Areas

Izembek is one of the most important migratory bird staging and wintering habitats in the world.

The Izembek National Wildlife Refuge lies along the Bering Sea side of the Alaska Peninsula. Izembek is an amazingly important migration stopover for many birds migrating to and from Arctic breeding grounds. The area regularly supports more than 90 percent of Brant that use the Pacific Flyway, more than half the world population of Emperor Geese, and a significant percentage of the world populations of Steller's Eider and Taverner's Cackling Goose. More than 82 species have been documented here. These are a few of the reasons Izembek is part of the globally significant Izembek-Moffet-Kinzarof Lagoons Important Bird Area.

In January 2018, the Department of the Interior signed a land transfer agreement with King Cove Corporation, which traded away vital bird habitat in the Izembek National Wildlife Refuge. The explicit purpose of the agreement was to facilitate the building of a road through federally designated wilderness and internationally recognized bird habitat.

National Audubon Society and eight other parties sued the Department of the Interior for this questionable deal. The lawsuit (filed on January 31, 2018) argued that the agreement violates sections of the Alaska National Interest Lands Conservation Act (ANILCA). The court agreed and on March 29, held that the Department of the Interior failed to explain its decision to enter the Exchange Agreement with King Cove in light of its previous decision that alternatives to a road exist and that a road would cause significant environmental harm. The federal court's decision vacated the land exchange. The decision was a big win for the birds and other wildlife in Izembek National Wildlife Refuge.

Building a road through Izembek's wilderness and wetlands would sacrifice key habitats and bring about significant long-term degradation to bird and wilderness values. Here's why: