Recently, the Federal Permitting Improvement Steering Council that approves actions under FAST has been given a proposal to add mining as a covered sector under Title 41 of the FAST Act. If this moves forward, it means mining activities can be fast-tracked with minimal environmental review, agency intervention, tribal consultation, and public comment processes. Imagine if we fast-tracked the Pebble Mine? Imagine if the Ambler Road did not go under any environmental review? Imagine a future where mining projects across Alaska happen without any notice to the local community, or without any protections in place to prevent the dumping of toxic waste into our state’s most sensitive salmon streams? The proposed change to the law writes people out of the way, so industry can move forward without having to listen to those who will be impacted.

Unlike the other sectors currently covered under FAST, mining brings with it a history of harmful impacts on birds, wildlife, and wetlands across the country. Mining releases more toxic waste into the environmental than any other sector of the economy. There are no safe ways to dispose of mine waste. It is stored into perpetuity in enormous containment structures that are vulnerable to catastrophic failure. They can become ecological traps for migratory birds. In 2016, thousands of snow geese died after landing on the Berkeley Pitt, a toxic waste pond almost a mile wide in central Montana. It was hypothesized that the birds were searching for open water landing sites and mistook the pit for a safe landing area.

Are we willing to trade water for mines? Alaska is home to our nation’s largest bodies of clean water. Rivers in the Arctic, eelgrass estuaries along the coast, boreal forest wetlands and muskegs, these waters provide food, water, and connection for our state’s communities. Mining pollutes water. In Alaska, a recent study found 80% of Alaska metal mines actively pollute our waters, and 100% of mines experienced at least one major spill or accidental release of hazardous materials. Instead of fast-tracking mining, we should be focusing on building rigorous standards—inclusive of community concerns and tribal consultations—that are adapted to each and every proposed mine across Alaska.

Governor Dunleavy has already proposed to fast-track two mines in Alaska under this proposed change: Donlin Gold Mine in western Alaska and the Bokan Mine in Southeast Alaska on the Tongass National Forest. Both mines are home to rare earth minerals, which are increasing value as demand for them grows due to their role in renewable energy storage batteries. But if mining is allowed to be fast-tracked under FAST, it will impact all future mining activity across the state at a critical time when mining threatens more and more of our public lands and waters in Alaska.

You can help us spread the word by submitting a comment that says “No” to the request in front of the Federal Permitting Improvement Steering Council to add mining as a sector under FAST, request that they conduct government-to-government consultation with interested tribes across the country, and evaluate and address the proposal’s potential to disproportionately impact minority, low-income and rural communities across Alaska and the nation. Thank you for advocating on behalf of birds, their habitats and all of the people who depend on them!

Follow our blog and keep up on latest news and notes on birds and conservation in Alaska.

Keep Mining Out of America's Wilderness

Tell the Federal Permitting Improvement Steering Council to oppose the addition of mining to the FAST Act and to consider the long-term effects mining has on America's natural resources. 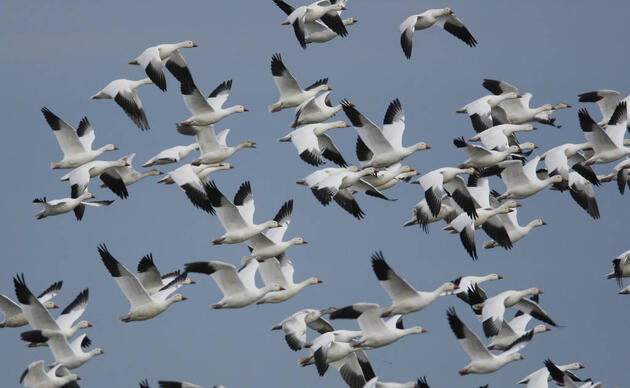